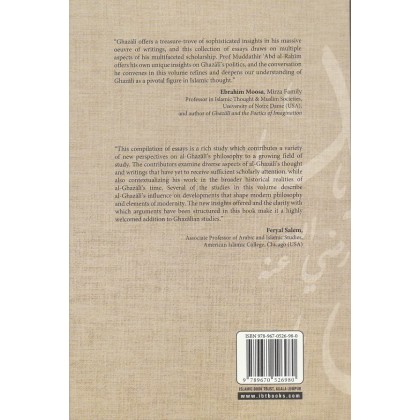 “Ghazālī offers a treasure-trove of sophisticated insights in his massive oeuvre of writings, and this collection of essays draws on multiple aspects of his multifaceted scholarship. Prof Muddathir ‘Abd al-Rahīm offers his own unique insights on Ghazālī’s politics, and the conversation he convenes in this volume refines and deepens our understanding of Ghazālī as a pivotal figure in Islamic thought.”
Ebrahim Moosa, Mirza Family
Professor in Islamic Thought & Muslim Societies,
University of Notre Dame (USA),
and author of Ghazālī and the Poetics of Imagination

“This compilation of essays is a rich study which contributes a variety of new perspectives on al-Ghazālī’s philosophy to a growing field of study. The contributors examine diverse aspects of al-Ghazālī’s thought and writings that have yet to receive sufficient scholarly attention, while also contextualizing his work in the broader historical realities of al-Ghazālī’s time. Several of the studies in this volume describe al-Ghazālī’s influence on developments that shape modern philosophy and elements of modernity. The new insights offered and the clarity with which arguments have been structured in this book make it a highly welcomed addition to Ghazālīan studies.”
Feryal Salem,
Associate Professor of Arabic and Islamic Studies,
American Islamic College, Chicago (USA)

“Within the tradition of tajdid, or ‘renewal’, in Islamic heritage, there might be disputes as to who is considered the mujaddid (‘renewer’) in each century—not so with Hujjat al-Islam, Imam Abu Hamid al-Ghazālī, who is so widely recognised as that figure in the 5th century. Unsurprisingly so, considering his width and breadth of knowledge in so many different sciences, particularly in law, jurisprudence, theology, Qur’anic commentary, and spirituality. One area that remains sorely understudied, nevertheless, is that which pertains to al-Ghazālī’s thoughts on the political realm, which, though profane and secular, can, in al-Ghazālī’s schemata, become a source of sacredness, if the correct approach and intention are taken. It is a pleasure to see this volume, Al-Ghazālī’s Political Thought and Other Essays on Hujjatu’l-Islām that engages with that area of his work.”
Hisham A. Hellyer,
Centre for Islamic Studies, University of Cambridge (UK)
& the Carnegie Endowment for International Peace

“It is a testament to al-Ghazālī’s scholarship that his writings are still hotly debated by Islamic studies specialists, both by his proponents and the detractors. In this edited volume, Prof. Muddathir ‘Abd al-Rahīm casts a spotlight on a less studied aspect of al-Ghazālī’s ideas—political and economic thought. The introductory essay by Prof. Muddathir, in particular, should be a starting point  and a great introduction to any future work on al-Ghazālī’s political thought. This book is a highly recommended reading for anyone interested in the medieval Islamic political and economic history and thought.”
Ermin Sinanović,
Executive Director, Center for Islam in the Contemporary World
at Shenandoah University (USA)