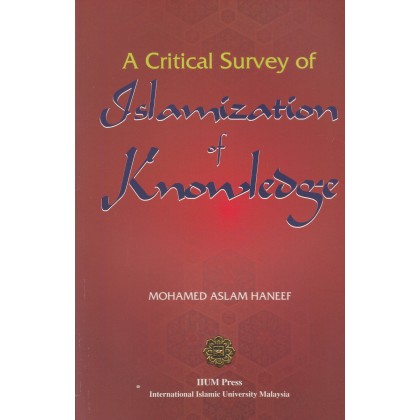 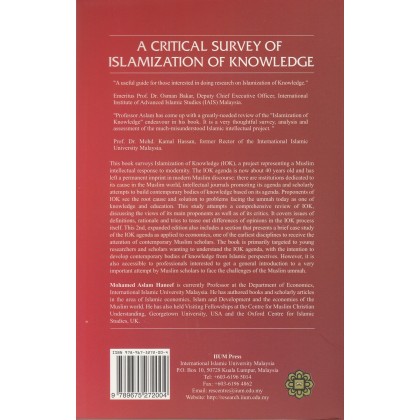 RM44.00
A Critical Survey of Islamization of Knowledge

A Critical Survey of Islamization of Knowledge - Softcover

This book surveys Islamization of Knowledge (IOK), a project representing a Muslim intellectual response to modernity. The IOK agenda is now about 40 years old and has left a permanent imprint in modern Muslim discourse: there are institutions dedicated to its cause in the Muslim world, intellectual journals promoting its agenda and scholarly attempts to build contemporary bodies of knowledge based on its agenda. Proponents of IOK see the root cause and solution to problems facing the ummah today as one of knowledge and education. This study attempts a comprehensive review of IOK, discussing the views of its main proponents as well as of its critics. It covers issues of definitions, rationale and tries to tease out differences of opinions in the IOK process itself. This 2nd, expanded edition also includes a section that presents a brief case study of the IOK agenda as applied to economics, one of the earliest disciplines to receive the attention of contemporary Muslim scholars. The book is primarily targeted to young researchers and scholars wanting to understand the IOK agenda, with the intention to develop contemporary bodies of knowledge from Islamic perspectives. However, it is also accessible to professionals interested to get a general introduction to one very important attempt by Muslim scholars to face the challenges of the Muslim ummah.

Mohamed Aslam Haneef is currently Professor at the Department of Economics, International Islamic University Malaysia. He has authored books and scholarly articles in the area of Islamic economics, Islam and Development and the economies of the Muslim world. He has also held Visiting Fellowships at the Centre for Muslim Christian Understanding, Georgetown University, USA and the Oxford Centre for Islamic Studies, UK.