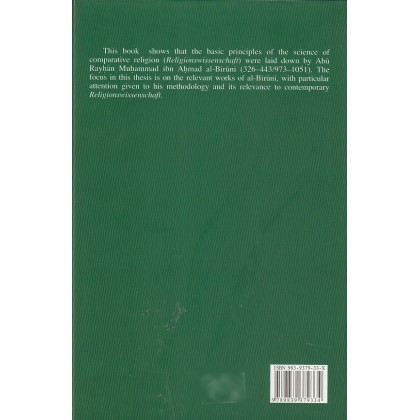 Religionswissenschaft or Comparative Religion, is a special legacy of Muslims to man's intellectual heritage. This thesis attempts to look into that legacy, focussing on the contributions and works of one of its prominent scholars, Abū Rayḥan Muḥammad ibn Aḥmad al-Bīrūnī (326 H./973 C.E.-443 H./1051 C.E.).

The study discusses the role of the Qur’an and Ḥadith as the inspiration and foundations of this discipline, followed by an enumaration of some major Muslim scholars in this field. Al-Bīrūnī’s life in its geo-political context is portrayed, and a brief exposition of his major contributions in this various fields of knowledge, particularly those in Religionswissenschaft. The thesis concludes with the highlights of al-Bīrūnī outstanding contributions vis-a-vis modern scholarship in Religionwissenschaft.

The religious communities discussed by the scholar are the Hindus, Christians, Jews, ancient Greeks. He also gives brief expositions of cults led by such leaders as Budhasaf, Mani, Mazdak, Bahafirid, al-Mukanna, al-Hallaj, and Ibn Abi-Zakaria.