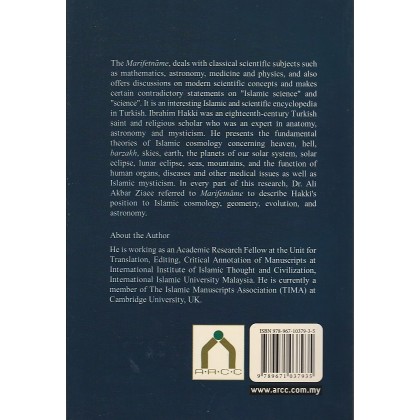 The Marifetname, deals with classical scientific subjects such as mathematics, astronomy, medicine and physics, and also offers discussions on modern scientific concepts and makes certain contradictory statements on "Islamic science" and "science." It is an interesting Islamic and scientific encyclopaedia in Turkish. Ibrahim Hakki was an eighteenth-century Turkish saint and religious scholar who was an expert in anatomy, astronomy and mysticism. He presents the fundamental theories of Islamic cosmology concerning heaven, hell, barzakh, skies, earth, the planets of our solar system, solar eclipse, lunar eclipse, seas, mountains, and the function of human organs, diseases and other medical issues as well as Islamic mysticism. In every part of this research, Dr. Ali Akbar Ziaee referred to Marifetname1 to describe Hakki's position to Islamic cosmology, geometry, evolution, and astronomy.