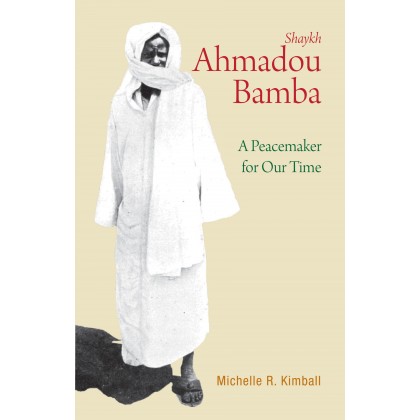 Shaykh Ahmadou Bamba: A Peacemaker for Our Time-  Softcover

Shaykh Ahmadou Bamba ranks with such apostles of peaceful militancy as Mahatma Gandhi, Abdul Ghaffar Khan, and Martin Luther King Jr. His adventures begin in the villages of Senegal in West Africa before he is thrust into the dense, treacherous, dark jungles of the French Congo and the pristine Sahara Desert in Mauritania.

The French who had control of much of West Africa, caught up with Bamba in the summer of 1895. Bamba seemed to know what was to happen to him for, the night before his arrest, he gathered his disciples together. The majority fervently pronounced that they were willing to launch a violent resistance and to die rather than allow the French to take Shaykh Ahmadou Bamba away. Bamba’s reaction was to state that in a war there are never any victors.

Thirty-three years of exile, imprisonment and house arrest only fortified his spirit, as affirmed by his moving ubiquitous poetic expressions. His writings are seen as living texts that make them forever current. He petitioned God to ensure that the verse he composed “be an eternal source of happiness for whomever would apply its knowledge . . . and that it would lead the sincere aspirant to spiritual vision, and to unveiling of profound secrets.”

This story of the role of African ‘natives’ and Sufi Masters in peace building breathes a fresh spiritual and intellectual air into the history of Islam in Africa in general and Senegal in particular.

Kimball’s presentation of colonial resistance and non-violent social change is compelling and timely. This is an unprecedented account, through oral and written histories, into the life and times of a great poet and peacemaker. It is a book of universal import with a message of truth, peace, and the power of nonviolence.