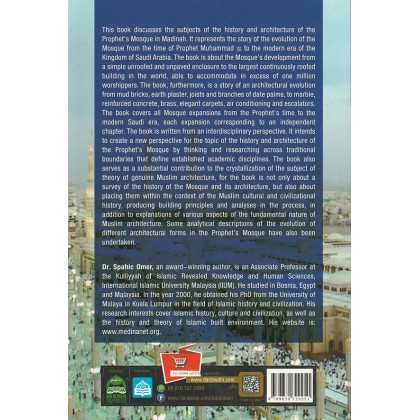 RM79.00
History and Architecture of the Prophets Mosque

This book discusses the subjects of the history and architecture of the Prophet’s Mosque in Madinah. It represents the story of the evolution of the Mosque from the time of Prophet Muhammad (pbuh) to the modern era of the Kingdom of Saudi Arabia. The book is about the Mosque’s development from a simple unroofed and unpaved enclosure of approximately 1,200 square meters, to the largest continuously roofed building in the world, whose total size, including the surrounding piazzas, became 400,500 square meters, able to accommodate in excess of one million worshippers. The book, furthermore, is a story of an architectural evolution from mud bricks, earth plaster, joists and branches of date palms, to marble, reinforced concrete, brass, elegant carpets, air conditioning and escalators.
There are nine chapters in the book. Each chapter is presented as an autonomous and standalone study. Hence, all nine chapters have comprehensive introductions at the beginning and conclusions at the end. There is no organic relationship between the chapters, though, in the sense that where one chapter ends, there exactly another one begins. Rather, every chapter both conceptualizes and contextualizes its own theme of a Mosque expansion differently, placing it in the context of a particular aspect of the history and architecture of the Mosque, together with the history and development of Muslims’ overall architectural heritage and traditions.
The disposition of the contents of the book, it follows, could be described as diversity in unity, rather than unity in diversity. That further means that the book is written from an interdisciplinary perspective, employing mainly descriptive qualitative research methods. The book intends to create a new perspective for the topic of the history and architecture of the Prophet’s Mosque by thinking and researching across traditional boundaries that define established academic disciplines. For achieving its objectives, the book taps into the methods and insights of several traditional academic fields of study.
The book also serves as a substantial contribution to the crystallization of the subject of theory of genuine Muslim architecture, for the book is not only about a survey of the history of the Mosque and its architecture, but also about placing them within the context of the Muslim cultural and civilizational history, producing building principles and analyses in the process, in addition to explanations of various aspects of the fundamental nature of Muslim architecture. Some analytical descriptions of the evolution of different architectural forms in the Prophet’s Mosque have also been undertaken.