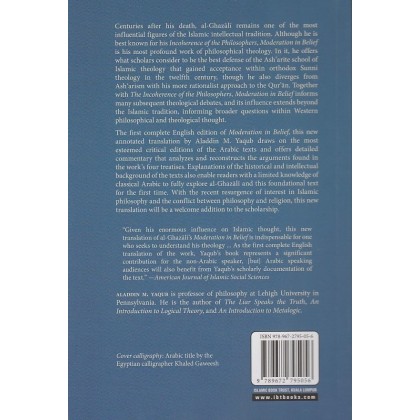 Centuries after his death, al-Ghazālī remains one of the most influential figures of the Islamic intellectual tradition. Although he is best known for his Incoherence of the Philosophers, Moderation in Belief is his most profound work of philosophical theology. In it, he offers what scholars consider to be the best defense of the Ash’arite school of Islamic theology that gained acceptance within orthodox Sunni theology in the twelfth century, though he also diverges from Ash’arism with his more rationalist approach to the Qur’ān. Together with The Incoherence of the Philosophers, Moderation in Belief informs many subsequent theological debates, and its influence extends beyond the Islamic tradition, informing broader questions within Western philosophical and theological thought.

The first complete English edition of Moderation in Belief, this new annotated translation by Aladdin M. Yaqub draws on the most esteemed critical editions of the Arabic texts and offers detailed commentary that analyzes and reconstructs the arguments found in the work’s four treatises. Explanations of the historical and intellectual background of the texts also enable readers with a limited knowledge of classical Arabic to fully explore al-Ghazālī and this foundational text for the first time. With the recent resurgence of interest in Islamic philosophy and the conflict between philosophy and religion, this new translation will be a welcome addition to the scholarship.

“Given his enormous influence on Islamic thought, this new translation of al-Ghazālī’s Moderation in Belief is indispensable for one who seeks to understand his theology … As the first complete English translation of the work, Yaqub’s book represents a significant contribution for the non-Arabic speaker, [but] Arabic speaking audiences will also benefit from Yaqub’s scholarly  documentation of the text.” —American Journal of Islamic Social Sciences