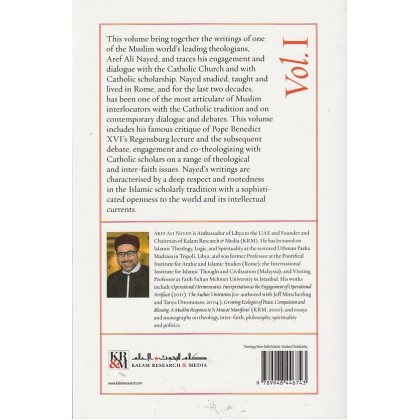 This volume brings together the writings of one of the Muslim world's leading theologians, Aref Ali Nayed, and traces his engagement and dialogue with the Catholic Church and with Catholic scholarship. Nayed studied, taught and lived in Rome, and for the last two decades, has been one of the most articulate of Muslim interlocutors with the Catholic tradition and on contemporary dialogue and debates.

This volume includes the famous critique of Pope Benedict XVI's Regensburg lecture and the subsequent debate, engagement and co-theologizing with Catholic scholars on a range of theological and inter-faith issues. Nayed's writings are characterised by a deep respect and rootedness in the Islamic scholarly tradition with a sophisticated openness to the world and its intellectual currents. The foreword is by Sohail Nakhooda, executive director of Kalam Research and Media.