#dudukrumahbacabuku Campaign Offer | Flat Rate Shipping RM6.00 only (West Msia) for order 2kg and below | Free shipping (West Msia) min. purchase of RM120
Free shipping within Peninsular Malaysia for order over RM120.00
ANNOUNCEMENT: Please place an order and make payment before 11:59pm, May 17th to ensure your order will be processed before 'Eid al-Fitr holiday. Order or payment made after the given time and date will be processed starting on June 1st. 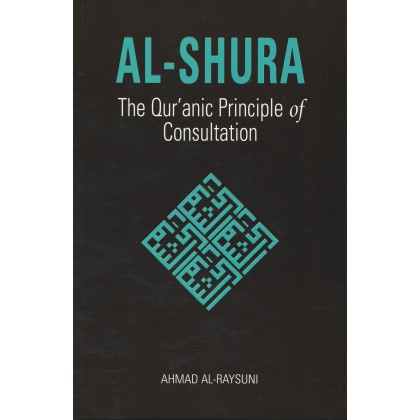 Muslims remain largely unaware of the importance and value of the Qur'anic principle of al-Shura (mutual consultation) and the significant role it can play in the advancement and reform of Muslim society. In this work, the author attempts to introduce and examine key meanings and practices of al-Shura, trace its historical evolution, and explore ways in which the principle can be introduced, institutionalized and applied in Muslim societies. There is no doubt that al-Shura has been sidelined throughout the Muslim world and the reasons for this are both historically and politically complex. According to the author, although much has been written on the subject, in reality it has been at best ineffectively applied and at worst heedlessly ignored. Even today it is a hotly contested issue. As al-Shura is increasingly associated with democratic participation in a decision-making process, debate has ignited with critics challenging the notion of equating the principle with western notions of democracy, with others claiming that the principle allows for a meaning that breaks the grip of centralized power. These and other issues are investigated with careful scholarship. Al-Raysuni concludes that al-Shura should be adopted as a way of life for all Muslims to protect their interests and as a vital tool for reconstruction and reform. In doing so he addresses the subject from some intriguing new angles, giving insight into areas hitherto little, if at all, examined.